On Saturday, May 7, 2016, nearly 300 cities worldwide, including Portland, Oregon, will participate in the 17th Annual Global Cannabis March. Portland participants will gather in Pioneer Courthouse Square for a rally that begins at 12:00pm, with a scheduled cannabis freedom march beginning at 4pm through downtown, accompanied by police escort.

On Saturday, May 7, 2016, nearly 300 cities worldwide, including Portland, Oregon, will participate in the 17th Annual Global Cannabis March. Portland participants will gather in Pioneer Courthouse Square for a rally that begins at high noon, 12 pm, with a scheduled cannabis freedom march beginning at 4 pm through downtown.

Musicians Garcia Birthday Band, The Hill Dogs, Mack & Dub and the Smokin' Section, Bad Habitat, Justin James Bridges and John Cornett & Friends have joined the lineup for the rally. There will also be several guest speakers and non-profit organization booths.

We march so cities and counties do not impose onerous regulations which offer little protection to the consumer or the non-consumer of marijuana. These choices only drive the cost of marijuana up and allow the unregulated market to thrive.

The 2014 Portland Hempstalk Festival occurs at Tom McCall Waterfront Park in downtown Portland, Oregon on September 27 and 28. Hempstalk provides educational awareness opportunities regarding the the medicinal, emotional and mental benefits of cannabis while advocating for its decriminalization for medicinal, industrial, and recreational use.

Founded in 2005 by The Hemp and Cannabis Foundation, the festival features live music, guest speakers, food and goods vendors and information booths. This public event has always been free to attend, with a suggested donation of $10 per person.

According to Paul Stanford, founder and presenting sponsor of the event, "Hempstalk is about the many uses of agricultural hemp fiber, oil, protein, fuel and medicine. We are working to end adult cannabis prohibition, allow adults to grow their own and license the legal sale of psychoactive cannabis to adults.

"We believe that hemp will save the Earth's biosphere with the adoption of hemp seed for bio-diesel fuel, which will solve the energy and world hunger problems, and stop deforestation when hemp fiber is used for paper and building materials," Stanford said. "We shall overcome!"

Event coordinators estimated that last year’s two-day Hempstalk festival, held at Kelley Point Park, was attended by 60,000 people. With recent years increases in festival attendance, growing awareness of popularity of its cause, Hempstalk organizers and city officials felt it had outgrown its previous location.

The Oregon House on Thursday passed SB 281, which adds post-traumatic stress disorder (PTSD) to the list of medical conditions which qualify patients for the protections of the Oregon Medical Marijuana Act. The bill now heads to Governor John Kitzhaber's desk.

The Oregon Senate had already approved the bill last month on a 19-11 vote.

If the bill is signed by the Governor, Oregon will join New Mexico, Connecticut and Delaware as the fourth state to specifically recognize PTSD as an eligible condition for medical marijuana. The bill had bipartisan support in both the Senate and the House.

Numerous studies have found that marijuana can be an effective treatment for severe PTSD symptoms. At least 20 percent of soldiers returning home from Iraq and Afghanistan suffer from PTSD, according to a 2008 RAND Corporation study, reports the Marijuana Policy Project.

Patients with PTSD, who often have trouble tolerating the side effects of pharmaceuticals prescribed for PTSD indications such as sleeplessness, anxiety, and social isolation, find that medical marijuana is a helpful alternative. There is also evidence that use of medical marijuana reduces the risk of accidentally overdosing from traditional prescription drug cocktails.

Oregon: Global Cannabis March to be Held in Portland this Weekend 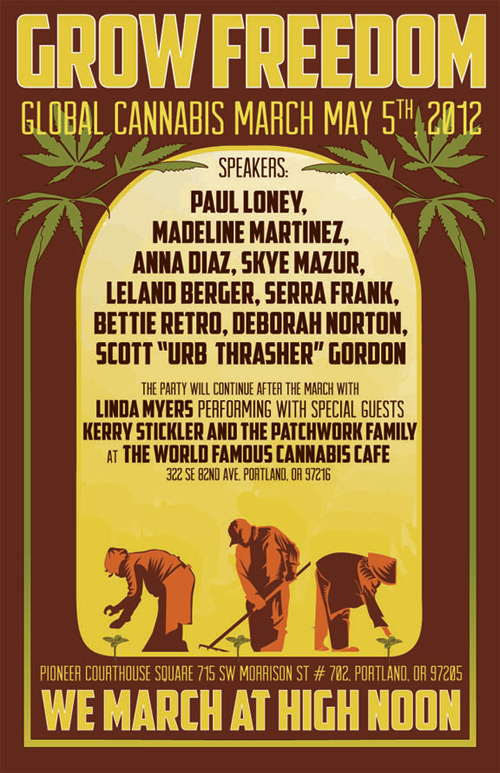 Over two hundred cities world wide join Portland for the Global Cannabis March on Saturday, May 5, 2012. Proponents will assemble in Pioneer Courthouse Square to march at "High Noon" through downtown Portland (Map Below), accompanied by a police escort.

Scott Gordon, Hemp Director for Oregon NORML reports, "We are looking for at least 3,000 people to show up and flex their rights. Anything less than that is unacceptable."

"Polls show that fifty percent of Americans agree that it is time to end cannabis prohibition. We need your support; come and be a part of the Global Cannabis March," is the call to action from Madeline Martinez, Executive Director of Oregon NORML.

Speakers for the rally immediately following the march include Martinez, Paul Loney and Anna Diaz who are members of the board of Oregon NORML along with attorney Leland Berger and Scott Gordon from NORML Rocks.

United States: NORML Chapters Unite for a Good Cause, Participate in Race for the Cure

On September 18th, Oregon NORML entered a team for the second consecutive year into the Komen Race for the Cure. Their team name, NORML People.

NORML chapters in Virginia and Texas also participated in the race this year thanks in part to encouragement from the NORML Women's Alliance. Cheyanne Weldon, Secretary of Texas NORML reports that Texas NORML and Dallas Fort Worth NORML both had teams this year.

Stacy Thies from the Sister-to-Sister program, a new coalition between the NORML Women's Alliance and Students for Sensible Drug Policy, created educational cheering stations in both San Diego and Arizona.

"It's important for us to step out of our cannabis communities and participate in events like this. It helps remove the stereotypes that slow us down in this movement," said Diaz. "I am hopeful that even more NORML groups will join in next year."

You can still make a donation to the team online at http://race.komenoregon.org/goto/normlpeople or by mailing your check or money order made out to Susan G. Komen for the Cure to Oregon NORML, P O Box 16057, Portland, OR 97292 before October 24, 2011. 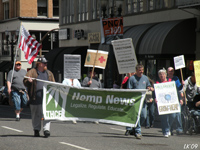 Saturday, May 7, 2011 marks the twelfth annual Global Cannabis March in Portland, Oregon. This year's March and rally runs from 10:00am to 2:00pm. Participants will gather in Pioneer Courthouse Square to march at high noon through downtown Portland, accompanied by a police escort. Cures-Not-Wars join the Oregon affiliate of the National Organization for the Reform of Marijuana Laws (Oregon NORML) and the World Famous Cannabis Cafe as sponsors of this event.

Madeline Martinez, Executive Director for Oregon NORML reports, "We hope to increase the size of the march to over 3000 in light of the many challenges currently faced by cannabis consumers."

Wy'East Drummers promise to inspire as they provide the send off for the march. Speakers for the rally include Anthony Johnson, Oregon Green Free Clinical Services Director.

"I am honored to be asked to participate," stated Anthony, who, along with the Coalition for Patients' Rights is a recipient of the 2010 Oregon Medical Cannabis Awards Freedom Fighter of the Year Award.

Portland, OR - Unique holiday shopping is just one reason to attend the ninth annual Oregon Medical Cannabis Awards (OMCA). The day event is free and open to the public from 10:00am to 5:00pm and features a unique green shopping bazaar and educational programs to be held at the World Famous Cannabis Cafe, 322 SE 82nd Ave, Portland, OR 97216.

The Cannabis Cafe is a private club that serves Oregon Medical Marijuana Program registrants, and is not usually open to the public. The OMCA provides a special opportunity for the curious to get a peek inside as well as the chance to shop for a wide variety of hemp and cannabis friendly products in one place. From hemp based soaps and clothing to handmade jewelry and mosaic art, the Holiday Bazaar at the OMCA is one of Portland's best kept secrets.