END_OF_DOCUMENT_TOKEN_TO_BE_REPLACED

United States: Advocates of industrial hemp point to Kentucky's past as top producer

For advocates of reviving industrial hemp production in Kentucky, the state's past as a leading hemp producer shows the crop's potential.

Kentucky Agriculture Commissioner James Comer and Republican U.S. Sen. Rand Paul are among those pushing to revive industrial hemp in the state.

It's ironic, Comer said in a recent interview, that until the Civil War, Kentucky led the nation in industrial hemp production.

The earliest settlers westward brought hemp seed in their baggage, James F. Hopkins points out in A History of the Hemp Industry in Kentucky. During the early 1800s, Kentucky hemp fibers were in demand for rope, sailcloth and rough fabrics used to wrap bales of cotton and make pants that were called Kentucky jeans.

Lexington was at the center of that production.

In 1838, there were 18 rope and bagging factories in Lexington that employed 1,000 workers, according to research by Lowell H. Harrison and James C. Klotter.

Lexington's John Wesley Hunt, the first millionaire west of the Alleghenies, made his fortune growing hemp and manufacturing the fibers into rope, said Jamie Millard, former president of the Lexington History Museum.

One of Hunt's factories was in downtown Lexington near North Broadway and West Third Street, Millard said.

Rolling Stone: The Next Seven States To Legalize Pot

Why Oregon, California and more are likely to follow Colorado and Washington toward legalization

The Berlin Wall of pot prohibition seems to be crumbling before our eyes.

By fully legalizing marijuana through direct democracy, Colorado and Washington have fundamentally changed the national conversation about cannabis. As many as 58 percent of Americans now believe marijuana should be legal. And our political establishment is catching on. Former president Jimmy Carter came out this month and endorsed taxed-and-regulated weed. "I'm in favor of it," Carter said. "I think it's OK." In a December 5th letter to Attorney General Eric Holder, Senate Judiciary Chairman Patrick Leahy (D-Vermont) suggested it might be possible "to amend the Federal Controlled Substances Act to allow possession of up to one ounce of marijuana, at least in jurisdictions where it is legal under state law." Even President Obama hinted at a more flexible approach to prohibition, telling 20/20's Barbara Walters that the federal government was unlikely to crack down on recreational users in states where pot is legal, adding, "We've got bigger fish to fry."

The Declaration of Independence was written on paper made of hemp. During World War II the federal government launched a “Hemp for Victory” campaign urging people to grow the plant to make ropes for the military.

Until the late 1800s, nearly all cloth and virtually all paper were made from hemp. It was so valuable that hemp could be used as money.

But that was then.

Today, industrial hemp isn’t strictly illegal, but farmers must get a permit from the Drug Enforcement Agency to grow it — something that’s proven impossible. Colorado and Washington have joined nine other states in legalizing the crop. But despite the passage of Amendment 64, the DEA still must give permission, even though states issue their own permits.

Colorado farmers could be able to grow industrial hemp as early as next summer, with state permits alone. It’s unclear if the federal government would raid industrial hemp farms operating without DEA permission.
Needless permits

Supporters say that it makes no sense to require federal permits. Hemp is harmless, they say, and can benefit the economy and environment. Hemp can remediate soil damage, be spun into clothing and bracelets, help create soaps and lotions, and even absorb tons of carbon dioxide a year. Currently, U.S. imports of hemp from Canada and China equal around $2 billion annually.

Kentucky: A cash crop for the commonwealth 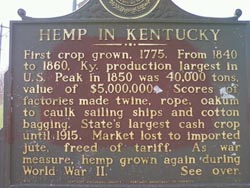 Economic development is something we talk about a lot in the Herald office. Sure, it may not be the juiciest of water cooler gossip, but it is something we are all affected by and hear about almost daily.

It is part of our jobs to know the news, and lately the news about the local economy has all been negative. We hear about layoffs, cut backs, and people being forced to move away for employment.

Located just blocks from the coast, this green home will offer extraordinary benefits to occupant health, comfort, fire resistance, pest resistance, sustainability and energy consumption, as well as protect its occupants from Hurricane force winds. With a design typical of single family homes in Florida, this house is subtle, practical and quietly makes a bold statement about green construction for mainstream consumers.

Hemp and lime-based binder are cast over a largely conventional wood frame. Lime render (think breathable stucco without portland cement) exterior finish will be directly applied to the Hemcrete walls. The interior of the Hemcrete walls will be a coated with a thin layer of breathable natural hydraulic lime plaster that will allow the beautiful organic hemp aggregate texture to show through. The plaster will be finished with a limewash color coat.