END_OF_DOCUMENT_TOKEN_TO_BE_REPLACED

United States: From the HEART - Feral Hemp Makes 35 Tons of Fiber and Four Tons of Seeds Per Acre 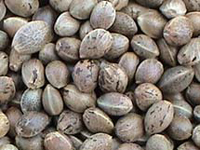 Hemp seeds produce more oil and protein than any other plant per land area cultivated. Hemp protein and oil are rich in the essential fatty acids (EFAs) that our brain and cardiovascular system need, Omega 3 & 6, in the perfect ratio for optimal human health. Hemp protein has all 8 amino acids, again, in just the right balance to meet humans' nutritional needs.

Per acre, according to a study published in the Notre Dame University journal, The American Midland Naturalist, wild hemp here in the USA produces 8,500 pounds of seed per acre. The study is called: An Ecological Study of Naturalized Hemp (Cannabis sativa L.) in East-Central Illinois, by Alan Haney and Benjamin B. Kutscheid at the University of Indiana at Urbana, Department of Biology.

United States: Hemp fans look toward Lyster Dewey's past, and the Pentagon, for higher ground

The gangly plant -- once a favorite of military ropemakers -- couldn't catch a break. Even as legalized medical marijuana has become more and more commonplace, the industrial hemp plant -- with its minuscule levels of the chemical that gives marijuana its kick -- has remained illegal to cultivate in the United States.

Found recently at a garage sale outside Buffalo but never publicly released, these journals chronicle the life of Lyster H. Dewey, a botanist at the U.S. Department of Agriculture whose long career straddled the 19th and 20th centuries. Dewey writes painstakingly about growing exotically named varieties of hemp -- Keijo, Chinamington and others -- on a tract of government land known as Arlington Farms. In effect, he was tending Uncle Sam's hemp farm.

What's gotten hemp advocates excited about the discovery is the location of that farm. A large chunk of acreage was handed over to the War Department in the 1940s for construction of the world's largest office building: the Pentagon. So now, hempsters can claim that an important piece of their legacy lies in the rich Northern Virginia soil alongside a hugely significant symbol of the government that has so enraged and befuddled them over the years.

All thanks to Lyster Dewey.