On May 16, Governor Jay Inslee signed Senate Bill 5131 into law. The new law, which goes into effect July 23, allows anyone 21 years or older to “deliver” to another adult up to one-half ounce of flowers, eight ounces of infused solid edible, 36 ounces of infused liquid, or three and one-half grams of concentrates, as long as they don’t charge money. Previously in Washington state, possession with the intent to pass the joint/bong/edible held a penalty of 5 years in jail and $10,000, and disqualification from federal programs.

Seattle Hempfest and the former Oregon Hemp Convention have joined forces to produce Portland Hempfest Expo in an effort to advance the public profile of the cannabis industry.

“We are thrilled to partner with our Portland family as we continue to define the Pacific Northwest as a regional leader in the burgeoning cannabis industry,” said Vivian McPeak, Seattle Hempfest's Executive Director.

“Cannabis is not the gateway to hard drugs like we’ve been told, but it can be a gateway to economic recovery and sustainability. The proof will be on full display at the PDX Hempfest Expo,” McPeak continued.

A full day of educational sessions with professional Cannabis speakers will educate attendees about rapidly changing developments in the Cannabis industry. A high concentration of legitimate Cannabis industry technology buyers will be present.

Cannabis activists are joining a nationwide protest on social media during the inauguration of Donald Trump as the 45th U.S. President by posting only black graphics. Activists are also encouraged to contact their Senators to reject President-elect Trump's cabinet nominations for their anti-cannabis stance.

The wealthiest in U.S. history, President-elect Trump’s cabinet is to include people who have been publicly hostile to the very agencies to which they are expected to provide oversight, revealing an historic plutocracy in the making.

"My concern is that Trump will move cannabis to schedule II, marketing it as "compassionately legalizing medical marijuana" while actually handing cannabis over the the pharmaceutical industry. Nothing about the Trump administration is predictable," stated Vivian McPeak, organizer of the Social Media Blackout.

The show is now available at www.tnmnews.com and at www.Live365.com.

Lati Grobman
Russian-born film producer Lati Grobman kicks off the lineup. She describes her transformation from being an opponent of cannabis legalization to becoming an advocate while producing her documentary Legalize It, which chronicles Proposition 19 and the 2010 campaign to legalize marijuana in California.

"It's a social problem," says Grobman, a mother of five children whose film producer credits include The Iceman and Righteous Kill. "I saw the injustice that is happening. There are people in jail for smoking pot who should not be in jail."

Grobman suggests that resistance to legalizing marijuana partly stems from economic benefits that come with a high rate of incarceration.

Is it a "protestival" or a celebration? Seattle Hempfest will be a little of both this year as attendees mark the historic passage of Washington and Colorado’s marijuana legalization initiatives in 2012. As many as 250,000 cannabis enthusiasts are expected to attend the 22nd year of the nation’s largest annual free-speech event in Myrtle Edwards Park, on the Puget Sound waterfront near the Space Needle, in downtown Seattle August 16-18.

Using the "human microphone" call and response pattern of communication that was employed in Occupy Wall Street demonstrations, organizers plan to send a message to President Obama that it is time to end the plant’s designation as a Schedule I substance under the Uniform Controlled Substances Act.

“More deaths are caused each year by tobacco use than by all deaths from HIV, illegal drug use, alcohol use, motor vehicle injuries, suicides, and murders combined,” said Vivian McPeak, Hempfest’s executive director. “Alcohol use is the third leading lifestyle-related cause of death for the nation, yet these two dangerous drugs have been exempted from the federal schedule entirely.

“Pot prohibition is a lesson in hypocrisy,” adds McPeak. “There has never been a single reported death from an overdose or toxic reaction to marijuana, and we intend to send a message to the President straight from the mouths of 100,000 Americans that it is time to entirely remove marijuana from the federal schedule, just like tobacco and alcohol.” 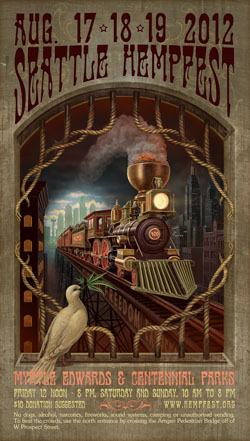 WHERE – Myrtle Edwards Park - Pier 70 on the downtown Seattle waterfront

Is it time to retire marijuana prohibition? The world's largest cannabis policy retirement party thinks so. Seattle Hempfest 2012 expects many tens of thousands to attend its 21st annual event, and as America’s largest marijuana law reform event Hempfest invites everyone to join in the celebration to end cannabis prohibition Aug. 17-19 at Myrtle Edwards Park.

The 2012 "protestival" features hundreds of booths and six stages of music and speakers dotting the mile plus expanse at Myrtle Edwards and Centennial Parks, on the beautiful Puget Sound. With the Washington state decriminalization Initiative 502 on this November’s ballot, there will be much discussion about the merits and mechanics of regional cannabis reform on all of Hempfest's stages. 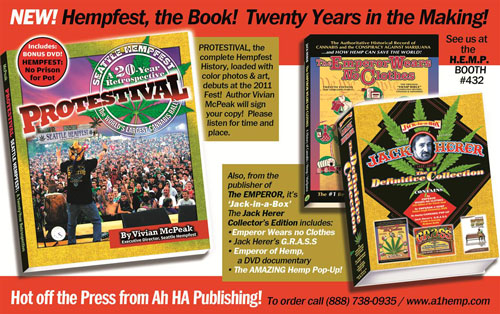 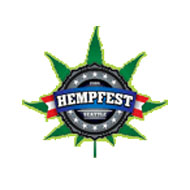 SEATTLE – How did a humble a group of community activists build the world’s largest pot rally? Protestival: A Twenty Year Retrospective of Seattle Hempfest, tells how the Hempfest was built from the ground up with little more than a vision and the conviction necessary to take that dream to fruition. Protestival details the long, hard struggle to build the world’s largest all volunteer annual free-speech rally.

To note this year's 20th anniversary milestone, Seattle Hempfest Executive Director Vivian McPeak has written a book about the two decades that the flagship annual event of America's cannabis culture has been advancing the cause of reform. The world's largest marijuana law reform gathering, the Seattle Hempfest draws hundreds of thousands of attendees down to the Seattle waterfront each year. This year's event is Aug. 19 - 21. 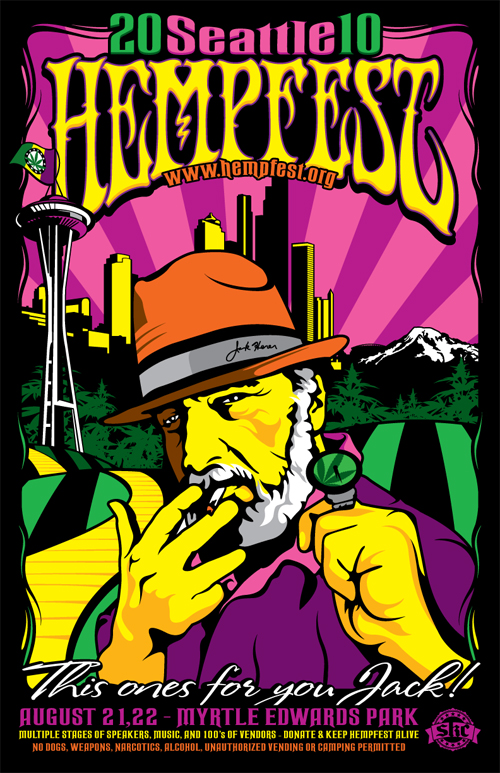 The Hemp and Cannabis Foundation (THCF) is proud to be the main sponsor of the Seattle Hempfest because our mission is to educate the general community about the benefits of the cannabis plant to our society. Hempfest 2010 will be held on August 21st and 22nd, and takes place every year at Myrtle Edwards Park expanding in recent years to include the adjacent parks. Hempfest offers five stages of entertainment, a Hemposium question and answer forum, and hundreds of vendor booths, sure to please a myriad of musical, informational, and entrepreneurial tastes.

The time to act in support of hemp is now, so please reach out and create awareness in your community. The Berlin Wall fell quickly, and together we can end this unjust war on the cannabis plant in the same manner, but we need to unite in solidarity. Vivian McPeak, the event's director declares, "No political or human rights movement in America has made it this far without eventually winning. It's just a matter of time."

On Saturday, June 26, organizers from across the state celebrated the 1st Annual Tacoma Hempfest at Wright Park.

The weather was perfect for a day out as thousands converged and brought attention to the cannabis plant, as well as highlighting the injustice done to Canadian citizen Marc Emery who many feel is wrongly incarcerated in the United States for selling seeds.

"Free Marc Emery" was the chant that could be heard throughout the day in opposition to his incarceration.

Musical acts and keynote speakers such Seattle Hempfest core member Vivian McPeak also inspired the crowd with moving dedications to fallen warrior Jack Herer, by declaring, "Every generation that comes along, it becomes necessary for somebody to step forward who can articulate a message of freedom and hope and show us a pathway away from tyranny to liberty. For this generation that was Jack Herer." He went on by stating, "Jack literally gave his life to the cannabis movement; he refused to stop!"

There is a chance, albeit an outside one, that the entire West Coast could go green in November. Last week we noted that the California tax and regulate initiative had made the ballot, and reported on the Oregon Cannabis Tax Act initiative's ongoing effort to make the ballot. This week, we turn our attention to Washington state, where yet another marijuana legalization initiative campaign is underway.

As the official ballot summary puts it:

"This measure would remove state civil and criminal penalties for persons eighteen years or older who cultivate, possess, transport, sell, or use marijuana. Marijuana would no longer be defined as a 'controlled substance.' Civil and criminal penalties relating to drug paraphernalia and provisions authorizing seizure or forfeiture of property would not apply to marijuana-related offenses committed by persons eighteen years or older. The measure would retain current restrictions and penalties applicable to persons under eighteen."

"Hemp will be the future of all mankind, or there won't be a future." Jack Herer 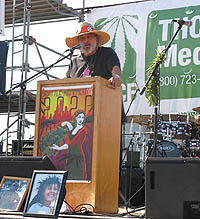 The featured video is an eclectic compilation of passionate speakers from the August 2009 Seattle Hempfest. It includes interesting perspectives from "The Emperor of Hemp" Jack Herer, Allen St. Pierre, Keith Stroup, Paul Stanford, George Rohrbacher, Anndrea Hermann and Seattle Hempfest's own Vivian McPeak. It is sure to give you inspiration.

"It doesn't matter if you are a Democrat or Republican, we are going to legalize marijuana no matter what happens in ten years, because when 60% of the American public wants something, they're going to get it." Allen St. Pierre

"Contact your legislators tell them to end marijuana prohibition. It's time to tax and regulate it. The more letters they get like that, the sooner the day will arrive." Paul Stanford

"No political or human rights movement in America has made it this far without eventually winning, it's just a matter of time." Vivian McPeak

It has been said that Vivian Mcpeak, Seattle Hempfest Event Director, is quite possibly the most inspirational speaker in the hemp movement, and this writer agrees with that consensus.

Vivian has the ability to energize a crowd like no other and has become a pillar of strength for those who demand their voices be heard regarding cannabis reform. There have been many fantastic and inspiring speakers throughout the years at the Seattle Hempfest from the iconic Jack Herer to the National Organization for the Reform of Marijuana Laws (NORML) founder Keith Stroup, but once you have heard Vivian speak, something about you is different; you feel you have become a part of history.

This August marks the 18th annual Seattle Hempfest, arguably the largest hemp festival in the world. This year's Hempfest theme: "A Hempen Future," will put a focus on the year 2020 and the possibility of the legalization of cannabis in all forms, radically impacting our future environment, economy, food and fuel resources. In honor of looking ahead to the future, the event's organizers have chosen progressive urban artist, Shyan Selah, to headline the opening night (7pm - August 15th) of this "protestival."