"Every generation must re-win its own freedoms." Gatewood Galbraith 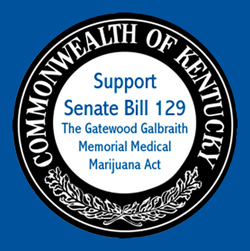 On January 31st, legislation that would make cannabis a schedule II drug, thus legal for doctors to prescribe, was introduced in the Kentucky State Senate. Senate Bill 129, sponsored by Senator Perry B. Clark, D-Louisville, is being titled the "Gatewood Galbraith Memorial Medical Marijuana Act".

Gatewood Galbraith was a prominent lawyer from Kentucky and an avid supporter of cannabis legalization. He dedicated over forty years to the restoration of the cannabis plant. Galbraith passed away last month from complications of pneumonia.

"Marijuana has positive medical benefits for patients dealing with illnesses like cancer, multiple sclerosis, and AIDS, to name a few," Senator Clark said. "I want to allow this as another treatment option for those individuals."

Senate Bill 129 would limit patients who are prescribed the drug from possessing more than five ounces per month. The patient could choose to fill their prescription at a board-certified pharmacy or to grow their own plants. Patients deciding to cultivate plants would be prohibited to no more than five at one time.

Molly Galbraith, Gatewood's daughter has watched her father fight to legalize hemp and marijuana for many years. She recently posted online "He was talking about protecting our civil liberties, finding alternative fuel sources, boosting Kentucky's economy, and helping ease the pain of the sick and dying and ease the massive burden of ever-increasing healthcare costs. In my opinion, this is an incredible way to honor my dad."

"Gatewood served as a constant reminder that we, the people, are still here and that individual freedom is worth fighting for at all costs," wrote 2011 gubernatorial running-mate Dea Riley. "His hope was that Kentucky would shine as a model of how democracy worked."

"Gatewood possessed incredible insight. He could see the truth and he educated us about liberty and the multipurpose utility of hemp. He taught Willie Nelson, me and many others about hemp seed oil as a biodiesel fuel. History will show he was ahead of his time," said longtime friend D. Paul Stanford.

In 2012, Missouri, Pennsylvania, Indiana and Ohio are presently considering legislation to allow cannabis for medicinal use, or decriminalization of small amounts. Sixteen states already have similar laws in place.

Many patients in the Commonwealth of Kentucky would be helped by this change to the classification of marijuana. Hemp News encourages patients to create a grass roots movement behind this bill. Please contact Senator Perry B. Clark (D), Senate District 37, and let him know you support his effort to honor Gatewood. Now's the time!