Global: History of the Transatlantic Telegraph Cable - The Eighth Wonder of the World

The transatlantic cable, completed in August 1858, was the beginning of instantaneous communication, and hemp was there. 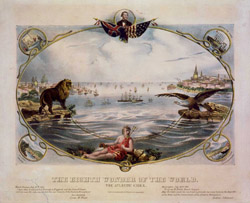 Our country has a history of growth and progress, from Pony Express letter to the iPhone call. Through the agricultural age to the industrial and straight into the technological age. Our citizens changing over time as new discoveries about our capabilities are made, we have gotten better at so many things, and yet continue to struggle in others.

The beginnings of our "telecommunications" era and our connectedness with the world truly began with the eight wonder of the world, The Transatlantic telegraph cable. The cable was the first used for telegraph communications laid across the floor of the North Atlantic Ocean. It crossed from Valentia Island in western Ireland to eastern Newfoundland. The transatlantic cable connected North America and Europe, expediting communication between the two. Whereas it would normally take at least ten days to deliver a message by ship, it now took minutes by telegraph.

The cable consisted of copper wires, covered with coats of gutta-percha (a genus of tropical trees native to Southeast Asia), and wound with tarred hemp. It was relatively flexible and able to withstand a pull of several tons. The hemp coating protected the concentric metal rings, or armor, from rust and decay. That armor, in turn, protected the copper transmission wire, according to History Detectives (video above). 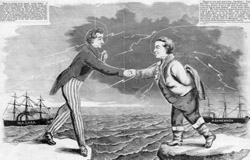 Evolution of the first cable

Not long after the first message transmission, after several days of progressive deterioration of the insulation, the cable failed. The reaction at this news was a hot topic. Some writers hinted that the line was a hoax, and others pronounced it a stock exchange stunt.

Experience had been gained in the meantime. Cables had been submerged in the Mediterranean and the Red Sea. With this experience an improved cable was designed. This core was covered with hemp saturated in a preservative solution, and on the hemp were spirally wound eighteen single strands of high tensile steel wire, each covered with fine strands of manila yarn steeped in the preservative. The weight of the new cable was nearly twice the weight of the previous attempt. Over 30,000 miles of cable was made in over 11 months.

Initially, the dream of near instant communication at such great distances was inevitably seen as crazy or impossible. Like many inventions throughout our history, the inventors that spurned our communications technology today were likely seen as dreamers or kooks.

But even in those early days of technology our friend hemp was there, woven through the Transatlantic cable. Hemp fiber, the protector. Strong and durable. In today's longing for green economy, we should do right by looking to that resource that did our citizens so well before it's demonization by the racist and ignorant.

Hemp can do so many things and we would be smart to allow it back into a spotlight on our planet. So pick up your cellphone (talk about instantaneous) and call your representatives and tell your friends. Restore Hemp!