Country music legend has long been a supporter of ending cannabis prohibition. 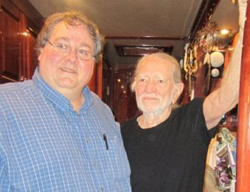 (SALEM, Ore.) - The Oregon Cannabis Tax Act (OCTA 2012) has been gaining momentum as the time grows closer to the deadline for signatures to be submitted to the State, but nothing compares to the recent endorsement by the legendary country music star Willie Nelson.

"I am very honored that Willie has given his full endorsement for OCTA 2012," said Paul Stanford, author of the bill. "While he was prepping for his show at the new Performing Arts Center in Las Vegas, he took the time to cut a 30-second ad for the campaign which will be appearing everywhere possible in the coming days and weeks." (See Video above)

"Willie and I met back in 1990 and he has been a supporter of our efforts here in Oregon for a long time."

Willie Nelson and the late Gatewood Galbraith went on a well known historic road trip in the early 1990s. The group drove Galbraith's biodiesel–fueled red Mercedes Benz across Kentucky, spreading the word about the future of the biodiesel industry. Stanford followed them in a caravan of 20+ cars, CNN and other TV News crews in tow, from Lexington, to Frankfort, the state capitol, and on to a benefit concert Willie did for Gatewood's first gubernatorial bid in Louisville.

It was a trip Stanford would never forget, forging a decades-long bond with the like minded "music great".

"Willie's endorsement will bring more attention to OCTA 2012, which is important right now,” Stanford said. "His fans cross all musical boundaries, and they are listening."

Willie Nelson has been an on-the-record supporter of ending cannabis prohibition for many years and is likely to do more for OCTA in the near future, according to Stanford.

The campaign says it will raise about $140 million a year for Oregon by taxing commercial cannabis sales to adults 21 and older. It should also save $61.5 million in reduced law enforcement in this area, and by redirecting efforts to violent crimes. If it passes in November, OCTA 2012 would effectively end the “need” for a marijuana black market in Oregon: Adults would have access to legal marijuana through state-licensed stores; Adults would be able to “grow their own”; licensed Oregon farmers would be able to grow marijuana for the stores, while unlicensed farmers would be allowed to grow (low THC) hemp for fuel, fiber and food.

“We are going full steam ahead. We have signature gatherers all over the state, meeting with groups and attending events. We have a way to go, but we are on target to reach our goal. Still, we need donations to help get this done. Every dollar contributed means signatures, and brings us closer to changing a very bad law- prohibition," Paul Stanford said.

CNE Systems is in control of all the OCTA 2012 contributions; they are the same company that handled campaign contributions for Governor John Kitzhaber and Oregon Attorney General John Kroger.

The verbiage of OCTA 2012 is written in such a way that if Oregon voters say YES in November, it should stand up against any federal attempts to overrule the will of the people.

This is what changing the world "is". Oregon has a unique and enviable reputation for having a mind of its own. What the voters have to say, especially a solid show of strength, will likely set the stage for other states to also make their stand against cannabis prohibition.

And to add some icing to that cake, maybe, just maybe, the homegrown belief in keeping Oregon green could even inspire a new song or two. Friend of Jack Herer, the author George Clayton Johnson says that “wishing” is real, and it works, that it’s not folly at all. So I’ll wish for an Oregon cannabis song by Willie in commemoration of this milestone to end reefer madness once and for all.

The OCTA 2012 advertisement by Willie Nelson:
“Hi, I'm Willie Nelson. I urge you to support the Oregon Cannabis Tax Act to regulate marijuana and restore industrial hemp. This initiative will end adult marijuana prohibition and let our criminal justice officers focus limited resources on real criminals, not on marijuana users like me. OCTA will also allow farmers to grow hemp for fuel, fiber & food, to create jobs and help our economy. Please support OCTA. Thank you!”