The First Obituary of Steven Hager

It’s a sad irony. When Steven Hager was the editor of High Times magazine, he was contacted by the Waldos -- a group of high school students who coined 4:20 as the time to toke at the intermission between their classes each day. He became the first journalist to interview them. However, he chose to commit suicide today, on Mount Tam, at 4:20 a.m. on the 20th of April, sort of like a contemporary marijuana boomerang.

Former US Deputy Attorney General and author of the Cole Memos, James Cole was recently a guest on Cannabis Economy Podcast with Seth Adler. In the conversation, Cole shared what the rescission of the Cole Memos and the Ogden Memo means for legal cannabis and the questions that the action raises. 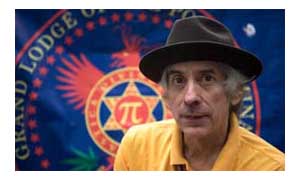 MANHATTAN – The former editor of High Times magazine claims in court that he was defrauded of his shares in the counter-culture monthly.

Represented by the Clancy Law Firm, Steven Hager brought his Jan. 9 suit in Manhattan Supreme Court some six months after Adam Levin’s Oreva Group bought a majority stake in the once family-owned magazine for $42 million.

Hager notes that he had been editor of High Times since 1998 but that his relationship with the magazine soured in 2013. As explained in a recent blog post, Hager at the time was nursing plans to enter the Sundance Film Festival.

MONTPELIER — Today, Vermont's state Senate passed a bill which would legalize social cannabis use for adults over the age of 21.

Under the Vermont legislation, an earlier version of which passed the Senate last summer, commercial sales of cannabis would not be allowed. But if the proposal is enacted, as is expected, the state would become the first to legalize marijuana by an act of lawmakers.

Gov. Phil Scott (R), who is expected to sign the bill, vetoed a social cannabis bill last May, stating he wasn't opposed to social cannabis but wanted to form a committee to study the issue's implementation in Vermont.

Global: Oregonian Being Held In El Salvador for 36 Grams of Cannabis

Clay Pierce, an Oregon medical marijuana cardholder, is imprisoned in the notorious Mariona prison in El Salvador for 36 grams of cannabis. This story is an important notice to all Oregonians: just because you are traveling from one legal cannabis location to another, we must be aware of the laws in our connecting flight locations.

In October, Mr. Pierce sold everything he had in Oregon and was moving to Colombia when his flight to Colombia had a brief scheduled stop in San Salvador, the capitol of El Salvador.

Earlier this morning, U.S. Attorney General Jeff Sessions moved to rescind Obama-era guidance, aka the Cole Memo, which has generally allowed states to implement their own cannabis laws without federal interference.

The Obama Justice Department deputy attorney general, who authored it in 2013, set out certain criteria that would allow states to implement their own laws mostly without intervention, if followed. The focus of the memo was interstate trafficking and abuse.

Canadian marijuana stocks were on a high Monday following reports that the government plans to legalize the substance for recreational use for adults by July 2018.

According to the CBC, Prime Minister Justin Trudeau's government is expected to announce the planned legislation the week of April 10.

The minimum age limit for purchasing marijuana will be 18, according to the CBC, although individual provinces can set the minimum age higher if they wish.

South Dakota Attorney General Marty Jackley recently announced that two marijuana measures have been proposed and filed with the Secretary of State.

The sponsor of the measures will circulate petitions with these statements. If the sponsor obtains the required number of signatures (13,871) on each petition by November 2017, as certified by the Secretary of State, the measure will be placed on the ballot for the November 2018 election.

The measures are titled:

Medical marijuana measures appeared on the South Dakota ballot in 2006 and 2010 but failed to pass both years.

Canada: Marijuana To Be Legalized By 2018

According to reports from Bloomberg and CBC News, Canadian Prime Minister Justin Trudeau will introduce legislation to make recreational marijuana legal for adults by July 2018.

CBC expressed certainty that the government will make an official statement confirming the plan by April 10.

The federal government, which is following the recommendations of a government-appointed task force, will ensure the marijuana supply is "safe and secure," while Canada’s provinces will be allowed to determine how it is distributed and sold, according to CBC News. Ottawa will set a minimum purchasing age of 18 — in line with Trudeau’s comments that the legal age to purchase marijuana should be the same as alcohol — while the provinces could set a higher age, the report said.

Trudeau has made it clear, however, that current laws still apply, and that people found growing, distributing, or possessing marijuana before legalization occurs will be processed according to those laws.